(From above) Baobab Fare’s Nyumbani, a kind of beef stew, is slowly cooked in ripened tomato sauce and served on spiced rice pilau with fried plantains and peanut-steamed spinach; A traditional East African chicken dish, the Kuku at Baobab Fare, is fried in a mustard and onion sauce and served with a selection of seasoned rice pilau (pictured)
or fragrant coconut rice.

I have a rule When eating out: never order chicken. For me, eating in a restaurant is an opportunity to discover. And as a Black woman of an ancestry of people who have mastered each and every preparation of the cherished poultry, I can say with certainty that I have crossed the limitless possibilities of the multifaceted bird. Unless it’s cured in sweet elf honey and served over a bed of salty beluga caviar, when chicken is on the menu I skim it.

Detroit restaurateur Mamba Hamissi and I connect through this feeling. With his new Baobab Fare restaurant, Hamissi challenges its guests to exceed their level of comfort and venture into culinary areas that they would otherwise escape. Instead of kuku, a dish that marinates a fried chicken leg in a robust mustard sauce with translucent, caramelized onions, Hamissi encourages baobab diners to try the mbuzi instead. Swahili for “goat”, Baobabs Mbuzi plays a goat leg that is slowly roasted until the meat is so tender that it slips off the bone as if by suggestion.

For dessert, he asks the guests to resist the urge to order the mandazi. The fluffy donuts, seasoned with cardamom and dusted with powdered sugar, are not far from the American donut and leave little room for adventure. Instead, he recommends Tamu, which opens guests’ eyes to the sweet alter ego of the avocado. Two scoops of silky pudding, reminiscent of scoops of matcha-flavored ice cream covered with sprinkles of chia seeds, offer a stunning taste experience. The expectation of the mild taste of avocado is fulfilled with a bitter surprise by the infusion of tangy passion fruit. 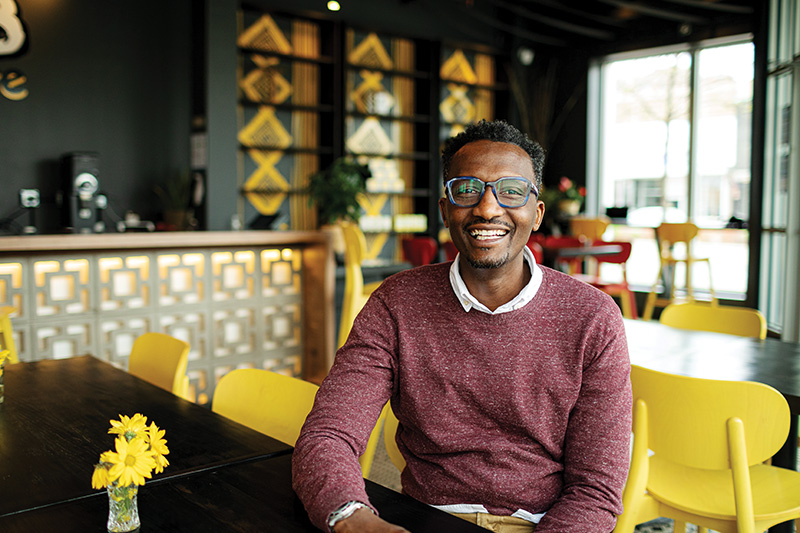 Owner Mamba Hamissi is the life in the dining room every day at Baobab Fare.

Like a loyal steward, Hamissi guides the Detroiters through a cuisine new to the landscape but very important to its Burundian heritage.

When he and his wife Nadia Nijimbere first conceived the vision for Baobab Fare, Hamissi saw a great opportunity in Detroit, namely for its predominantly black community. Back in 2017, African Americans made up nearly 80 percent of the city’s population. Despite the heavy black presence, Hamissi learned that there was no full-service East African restaurant in Detroit. Expecting black Detroiters to be the strongest proponents of African cuisine, Hamissi marveled at the idea of ​​serving the community. “I thought, ‘Isn’t there an African restaurant? In a place where the majority of the city is black? That can’t go wrong. ‘”

Today, Maty’s Senegalese restaurant on the west side of Detroit and Yum Village, the Afro-Caribbean eatery just steps from Baobab Fare, have attracted attention for bringing West African influence to the city. Still, baobab offers a unique perspective that has not yet crossed the city limits. Up until now, Ethiopian restaurants in Ferndale and Windsor have been the obvious choice for city dwellers to sample East African cuisine and its wonderfully diverse dishes influenced by the Middle East, India and Europe. Although she had no professional culinary training, Hamissi trusted the culinary skills of Nijimbere, and the two were confident that Detroiters would embrace their culture with open arms. “We had nothing – no money, no business plan, just an idea,” he says.

The flock of locals in the entrance area waiting to be seated at the baobab fare on a Saturday night is evidence of Hamissi’s instinct. Since the restaurant opened in April, Nijimbere and Hamissi have filled the space with hundreds of guests every day. Nijimbere, a shy cook, moves quickly behind the closed doors of the kitchen, and Hamissi, her open-minded other half, strolls between the tables in the dining room. He talks and laughs with the guests as if they were guests in his own home. 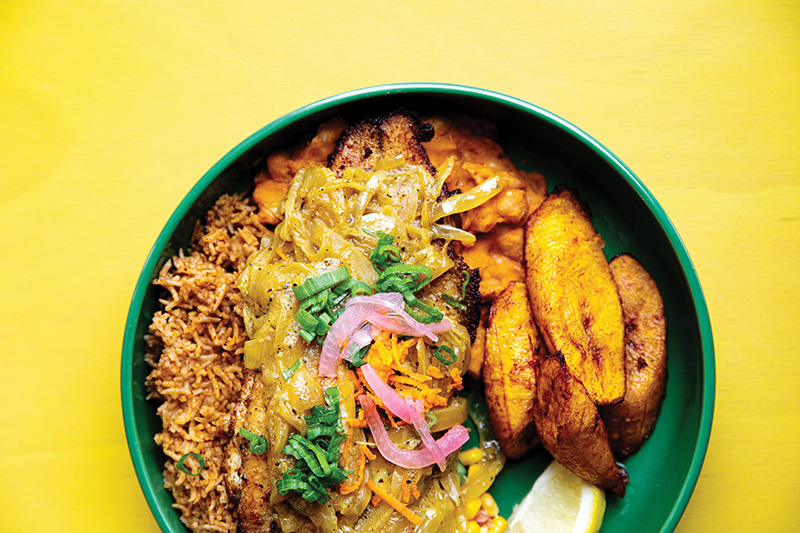 The samaki plays a tenderly fried fish with peppers and sautéed onions. It is served with a crunchy lamb’s lettuce, fried plantains, steamed yellow beans and seasoned rice pilau.

In the early afternoon, the Maracuya Ji restaurant sells out, a light, citrus-like passion fruit drink served cold in a glass bottle that reveals its bright marigold color. In the evening, one or more of the dishes are also sold out – a large part of the menu is in great demand. It’s a path the restaurant has followed from the start. In 2017, Nijimbere and Hamissi tested the concept with a series of pop-ups across the city. At every opportunity, they were sold out of inventory within minutes. In less than four years, they would win the $ 50,000 Grand Prize of the Hatch Detroit Initiative and own a brick and mortar house on Woodward Avenue with the stately presence of the historic Fisher Building in sight.

Baobab Fare’s success is offset by its hardships. “If you want to talk about challenges, speak to me,” says Hamissi with the carefree laugh of a man who has apparently gone through a fight.

A year after the couple married in Burundi, Nijimbere’s role as a human rights activist put her family at risk, and the couple had to seek asylum in the United States – Detroit was the only American city that offered protection and medical assistance to refugees from East Africa. Nijimbere, who was most at risk of persecution, arrived in Detroit in 2013. Unknowingly pregnant with fraternal twins, she spent more than two years at Freedom House, a temporary home for asylum seekers, before Hamissi arrived in 2015. Daughters likely took their first steps and uttered their first words before meeting Hamissi. 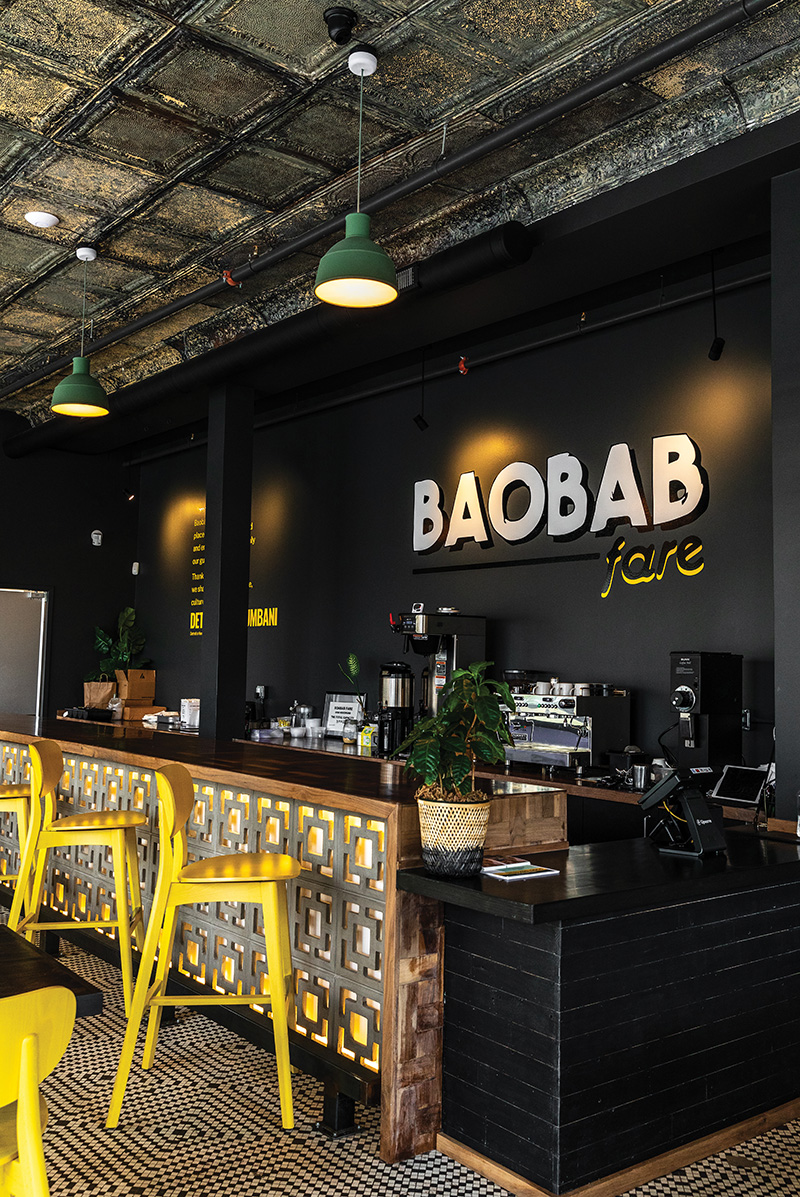 Minimal black-and-white walls in the restaurant’s dining room are enlivened with yellow accents, tribal and geometric details, and fresh greens. Patina on the ceilings create a warm charm.

The couple taught themselves English through the cartoons they watched with the girls. The education Hamissi received in Burundi was not recognized in Michigan, and without savings or credit he could not afford to attend school here. Instead, he worked odd jobs as a driver and logged long hours for low wages. “Sometimes you have to smile, even if it hurts,” he says.

Starting their own business from scratch seemed like the couple’s only option financially, but even in the semi-finals of the Hatch Detroit competition, Nijimbere and Hamissi’s refugee status nearly stifled their progress. Asylum seekers are not allowed to use social media. That made it difficult for the duo to get Baobab Fare known. Instead, these hit pop-ups in local restaurants got the job done.

Hamissi’s belief that Burundian cuisine would be well received by Detroiters proved forward-looking as the community continued to support the business. Midtown Detroit Inc., Prosperus Detroit and the Michigan Good Food Fund helped Nijimbere and Hamissi secure funding for the land on Woodward. Hamissi was initially so stunned by the opportunity that he refused the location. “I thought it was too good to be true.” 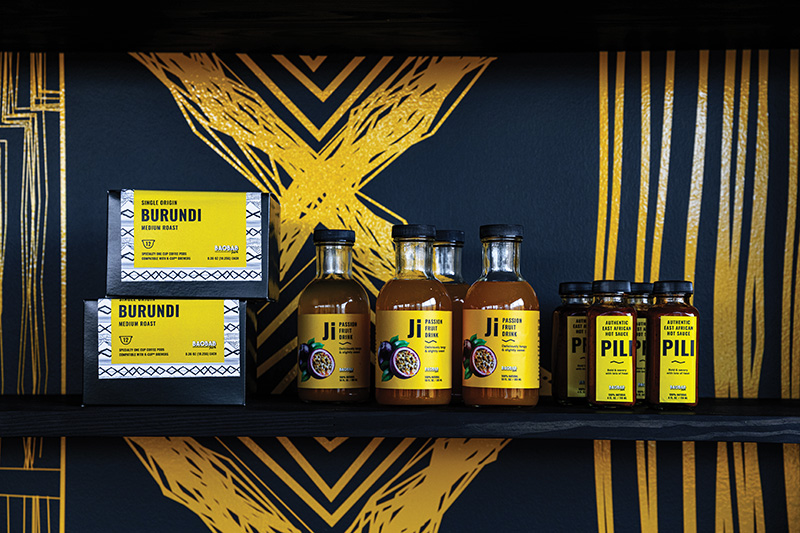 Bring the taste of baobab home with take-away coffee pods, maracuya ji, or zesty hot sauce to keep in your kitchen.

Then there was the general contractor whose wife convinced him to build the room. She found Hamissi “cute”.

Hamissi firmly believes that love and support are deserved. “It’s my responsibility that you love me,” he says. After all, he sees Baobab Fare as a meeting place for the African community and those who want to learn more about African culture. But first, he says, it is his duty to win her trust. “Detroiters are loyal, but you have to give them a reason to support you.”

The confidence building exercise he’s still working on the most is in Detroit’s Black community. It turned out that one of Hamissi’s instincts turned out to be wrong. “My illusion that everything would be fine with an African restaurant in a largely black city was wrong,” he says. The guests at Baobab Fare, he has learned, are a mixed mix of ethnicities, and of the diverse clientele, black customers seem to be the most reluctant to try what Hamissi regards as the entry-level dishes into Burundian cuisine. “I tell this joke a lot,” says Hamissi between laughs. “I say, ‘You have been eating chicken all your life – try something new!’ ” he says.

If he can convince African American guests to follow a model similar to my own by trying a beef or even a fish dish, he thinks it is an accomplishment. “Once you’ve tried it, this is your home.”