Detroit Design 139 showcases how Detroiters are reshaping their neighborhoods

Detroit has always been a design-forward city, a fact made official back in 2015 when they were designated a UNESCO City of Design, the only in the United States. A center of architectural innovation, futuristic automotive design, boulevards meant to rival the Champs-Élysées, and one of the U.S.’s foremost collections of art, the city in recent years has gotten more attention for its bankruptcy, corruption, and mass foreclosures and vacancy.

But, as Olga Stella, executive director of Design Core Detroit, a partner organization which “champions design-driven businesses and their role in strengthening Detroit’s economy,” points out, “Detroit is not and never has been just one thing.” Throughout its expansive 139 square miles, many are working to create neighborhoods and a city that works for them. Design doesn’t just happen at the rarefied scale of a Beaux Arts museum, it happens in and by communities who work to create a city they want to live in. These projects are being celebrated at the second iteration of Detroit Design 139 (DD139), a serial exhibition co-organized by the City of Detroit, Design Core Detroit, and developer Bedrock. Members from each organization, as well as nine others, served on the advisory board. The projects were selected by a jury of design notables, both from Detroit and other cities, including New York City Public Design Commission executive director Justin Garrett Moore and Detroit-based equitable development strategist Lauren Hood.

With the main showcase at street level in downtown Detroit in a Bedrock-owned building, as well as at three partner locations throughout the city, celebrates 70 projects under five thematic headings that, according to the organizers and jurors, embody DD139’s 2019 theme of “Inclusive Futures”.

“All of us working on design problems and projects should be holding ourselves to higher standards,” said Melissa Dittmer, Bedrock’s chief design officer, of the ethos of inclusion ostensibly showcased in the exhibition, which features projects built in the last two years or to be built in the next three. The projects were laid out rather blandly like a well-executed science fair or a real-life PDF, with posters along temporary slatted walls and the occasional model or video. 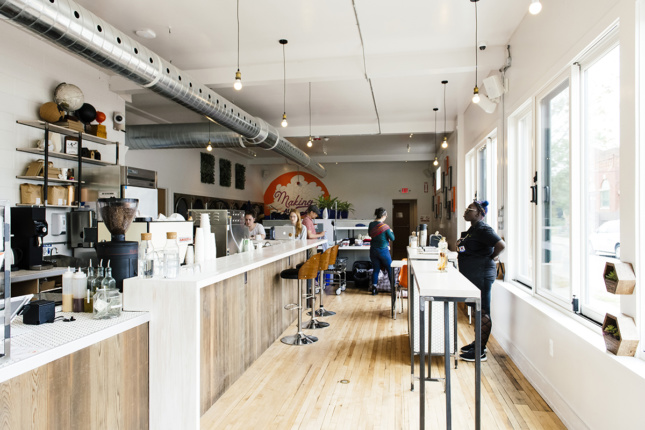 LAAVU helped the nonprofit MACC Development convert this former factory into a 7,000-square-foot space with offices, coworking and event spaces, classrooms, and a cafe-meets-laundromat, which two business residents said they desired. (Courtesy LAAVU)

Stella said that, historically, “In a city that doesn’t have a lot of capital [the question of] ‘how are we going to pay for it?’ was guiding decisions, not design solutions,” noting that it was a developer-driven process, with Maurice Cox, Detroit’s outgoing planning and development director. (Cox was also on the advisory committee of DD139.) Dittmer says there was a need for new building to begin “prioritizing the process as much as the outcomes,” something many of the projects exhibited; for example a cafe-laundromat combo, The Commons, designed by the local firm LAAVU in a process which founder and chief design officer Kaija E. Wuollet explains, began by collectively creating a strategic plan to inform the design, building, and operations.

The choice in amenities was guided by neighbor requests and they act as not only a space in their own right, but a revenue stream for the non-profit MACC Development, which provides literacy programs, coworking space, artistic opportunities, and other community resources right within the building. This was a recurring theme: neighborhood-focused and neighborhood-led design solutions are a strength of Detroit now and could be what shapes the city’s future. But, another recurring theme that the MACC project implies is that due to a dearth of government support, many private organizations have had to pick up the slack. That said, some public programs were featured in the exhibition, perhaps among the most noteworthy for designers, the Michigan ArcPrep program, a public school architecture initiative led by the University of Michigan’s Taubman College.

Even restaurants were in the exhibition. In community engagement workshops, residents in the Jefferson Chalmers neighborhood expressed a desire for more places to eat and more Black-owned businesses. With the help of a Motor City Match grant, Norma G’s was opened by Lester Gouvia. Kaitlynn Hill, one of the project’s architects from Hamilton Anderson Associates, said she saw this as “a community-based project,” as much as a commercial enterprise. 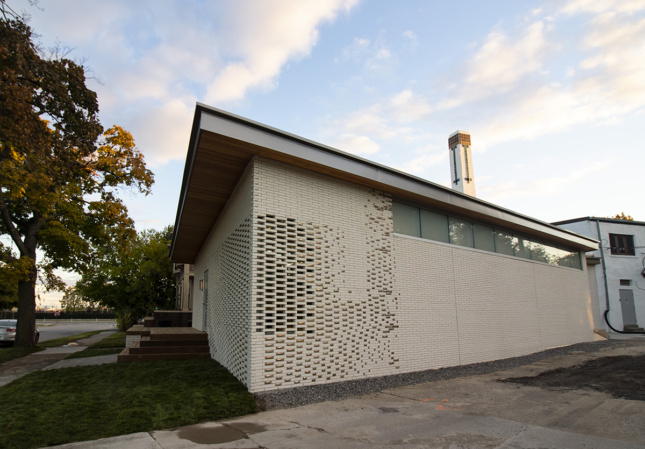 Other Detroit mainstays made the cut for the exhibition. The legendary Pewabic Pottery, whose distinctive glazed tiles that adorn high-rise facades and fireplaces alike are still made in small batches in Detroit, had recently undergone an expansion with the help of inFORM Studio. While the expansion added more workspace, it also helped Pewabic—which is organized as a non-profit—further advance their public mission. Like the original 1903 structure, this new building is close to the residential street. In addition to a shop, museum, and classroom space, there is also an open courtyard with a large mural that hosts events or allows passersby to come in and chill for a bit. In addition, Pewabic goes into communities with portable kilns, keeping design heritage alive and inviting others to participate in it.

Many cultural projects were featured, including a skatepark-slash-sculpture park and public mural initiatives. One particularly intriguing project highlighted was the Detroit Historical Society’s Detroit 67, which investigated the legacy of Detroit’s 1967 rebellion in a “community engagement” project by collecting oral histories, producing an exhibition, and providing grants to “placemaking” projects. Some of the projects include an LGBT-focused community garden, an outdoor theater space focused on the Black, Latinx, and Arab communities of Detroit, and a memorial to those who lost their lives around the time of the uprising.

There were a number of environmentally-focused projects, both grassroots and large scale, a balance and comparison that was interesting to see. Some included academic research on stormwater management interventions, the Zero Net Energy Center, rain gardens, and an upcycled windmill. 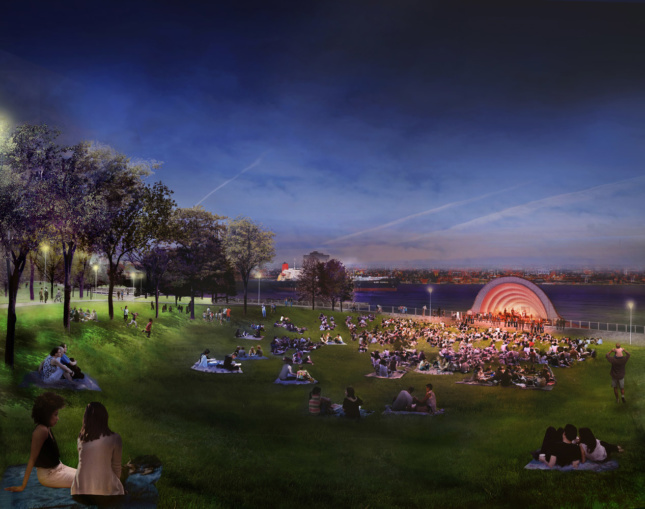 Projects with international design pedigree also appeared: David Adjaye and New York’s Michael Van Valkenburgh Associates have designed a pavilion and other structures for the Ralph C. Wilson Centennial Park, which, when it’s open, will be part of a network of riverside parks and greenways in an area that was once home to abandoned manufacturing plants. The park is currently overseen by the Detroit Riverfront Conservancy.

However, on a tour through the Dequindre Cut, a rail-trail connected to the riverfront, on a Sunday when it was clearly being enjoyed by many, it was mentioned by an employee of the Conservancy that many houseless people formerly lived on the trail. In fact, this was mentioned many places, but inquiries made into where those people went and whether these “inclusive” projects accounted for housing access for those they were displacing remained mostly unanswered. While houselessness is declining in Detroit and new projects like the short-term housing Pope Francis Center (not exhibited) are on their way to reality, police have also been known to sweep away the belongings of the houseless, even in the dead of winter. If this park is for everyone, what about those who called it home?

In this second iteration of DD139, the choice was made to include projects from other UNESCO Cities of Design, like Saint-Étienne, France, and Montreal, which are using design to address many of the same challenges faced in Detroit. The organizers hope that this can help create a dialogue and show the fact that Detroit, though a unique situation, is not alone, and that everything from new elder caregiving studies in Singapore to canal projects in Mexico City could help Detroit think through its own unique challenges.

However, how every project fit in seemed unclear. A project, the Ruth Ellis Clairmount Center, to help give homes and resources such as jobs and healthcare to houseless youth and those at risk of houselessness, especially LGBTQ+ kids who make up as much as 40% of this country’s houseless population, are undeniably necessary, ameliorative projects. However, on the poster for a banal mixed-use and mixed-income housing development the description of why the project is inclusive reads: “The project has gone through extensive design iterations, city vetting, and community engagement processes to ensure it captures neighborhood feedback. Meetings around the community were offered in both English and Spanish, with translators and/or translation equipment at every meeting, making it as accessible as possible for community members.” Is this not the bare minimum we should expect? Pair that with the bare minimum in architectural quick-build tastelessness by the Philadelphia firm SITIO and one has to wonder what sort of definition of “design” is at play here.

Some projects are more design-y than others. Pewabic Pottery, the Symbiotic Landscape watershed restoration, a digital mapping project that proposes using architectural and urban interventions to fight Detroit’s “digital divide”—these all make design part-and-parcel of their mission, and they’re realizing that mission. An entrepreneurship incubator or a bakery in a mixed-use development, Core City, which some Detroiters I spoke with expressed distrust of, might be interesting, or at least tasty, but is it necessarily a “design” solution? Is a building in and of itself using design to address these so-called civic challenges, let alone being inclusive by and through design? 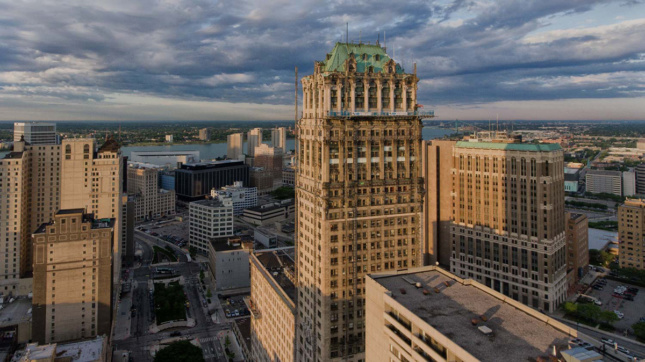 This vagueness of mission and indeterminate take on the role of design in some projects points out a bigger issue. The project’s main sponsor and proponent, one of the three partner organizers, Bedrock, has undeniably reshaped downtown Detroit, perhaps in ways, some residents might see as for the better. From the design-forward Shinola Hotel to the forthcoming first foray by the fast-fashion retailer H&M to the revamp of the 475-foot-tall Book Tower, a magnificent and delirious example of early 20th-century architecture that has sat unoccupied for a decade, downtown Detroit is increasingly lively (and increasingly expensive). And, fitting with the exhibition’s theme, “Creating unique, inclusive experiences through real estate is Bedrock’s mission,” claims a Bedrock press release. Yet, as the Detroit Free Press has recently revealed, Bedrock has gotten huge swaths of downtown property at little cost, with many incentives and tax breaks, and with an unheard of lack of financial oversight. Also, Bedrock has leveraged their power to strong-arm Michigan’s OSHA into looking away from their safety violations while “lecturing” inspectors on how to do their jobs. Is creating buildings without protecting working people inclusive?

In addition, while Bedrock has been touting their successful bid to redevelop the site of the so-called “fail jail,” turning this long-vacant lot into usable space, this deal was negotiated with Wayne County by allowing Rock Ventures, another Dan Gilbert organization and Bedrock’s parent company, to construct that county’s jail, presumably without sullying Bedrock’s name. How can one claim to not only celebrate inclusive design but create “inclusive experiences,” while supporting the creation of one of the United States’ most powerful and inarguably racist tools of social and mortal death?

Perhaps the theme, “Inclusive Futures”, says it all: a virtuous-sounding word like “inclusive” can itself often be so inclusive as to be virtually meaningless, a rhetorical throwaway. Because what is “inclusion”—and what “inclusive futures” are possible—without equity, without reparations, without an effort to shift the balance of political and economic power? While many grassroots projects and even larger scale ones featured in DD139 are compelling, worthy, and deserve the spotlight, with the ongoing efforts of the exhibition’s primary sponsor Bedrock to stymy state oversight, build jails, and get land cheaply, you wind up not only with misplaced good intentions—you get design washing.

DD139 is on view in Detroit through September 30th. You can read more about the projects here.