On Monday, October 5th, Detroit welcomed a new Jefferson Chalmers restaurant with the official opening of East Eats – a restaurant made up entirely of geodesic domes. East Eats is a “COVID Safe” dining option and aims to provide a safer alternative to eating out and socializing during the pandemic. “East Eats is born of COVID and the need to maintain and maintain the human connection at a time when we need to be socially distant,” says founding partner Lloyd Talley.

Talley, a research fellow at the University of Michigan, along with his colleague at Howard University and Detroit Black Restaurant Week co-founder Kwaku Osei-Bonsu, developed the restaurant with the aim of capitalizing on the logistical challenges of eating in the pandemic to create a different way of eating together. The partners will be joined by Chef Nygel Fyvie, a restaurant alum who most recently worked as a manager in the kitchen at Cooking With Que.

East Eats is on a side lot that Osei-Bonsu acquired last year through a city program for just $ 100. In addition to this open space, the partners built 10 geodesic domes with seats for up to eight people per group. (There are two additional domes for service staff.) Talley suggested the domes as a solution to East Eats’ needs after eating at a rooftop restaurant made of geodesic domes in New York, and the partners rented one Food truck to provide Fyvie with kitchen space at a fraction of the cost of building a traditional restaurant. “We really wanted the model for this business to be very lean and very adaptable,” says Talley. “If you’ve got a lease on a building right now, you’re basically shitty.”

The partners not only thought about what a restaurant could be spatially, but also thought about how they could put together a menu differently. East Eats’ Asian-inspired menu consists of wraps, tacos, bao, and okonomiyaki (hearty Japanese pancakes). Osei-Bonsu said he was interested in restaurants that served family dishes and small plates before the pandemic, but the idea of ​​sharing food has taken on a different quality during the pandemic. “Street food allows us to keep things separate,” he says. “[Customers] I can still eat as a family without having to worry about touching their food or their food. “

The partners also wanted to approach pricing differently. “A big deal for us was making sure we were vegan,” says Osei-Bonsu. “You will find that most of the items on our menu are vegan first and then have the option to add protein at no additional cost.” To keep costs down, the restaurant is also BYOB. Each reservation lasts two hours, with preference for two groups of four or more. Partners tell Eater that there is a limited number of seats for two each evening. 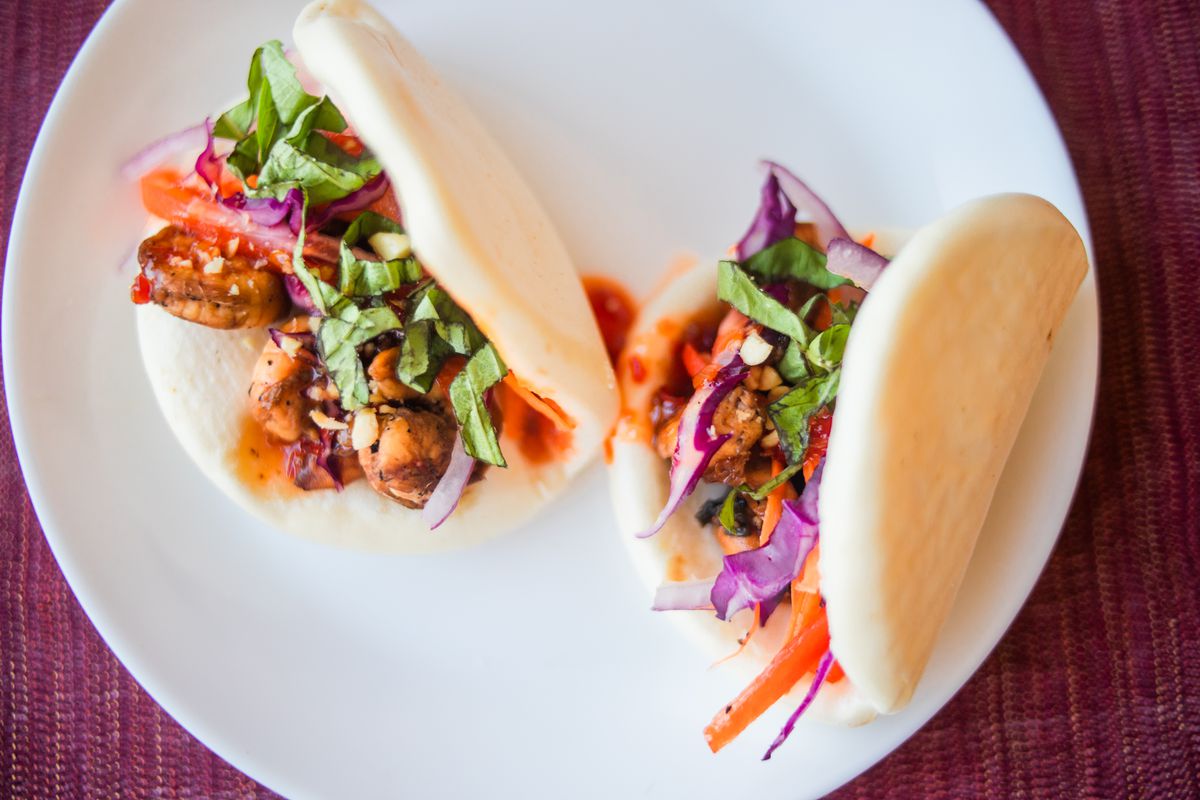 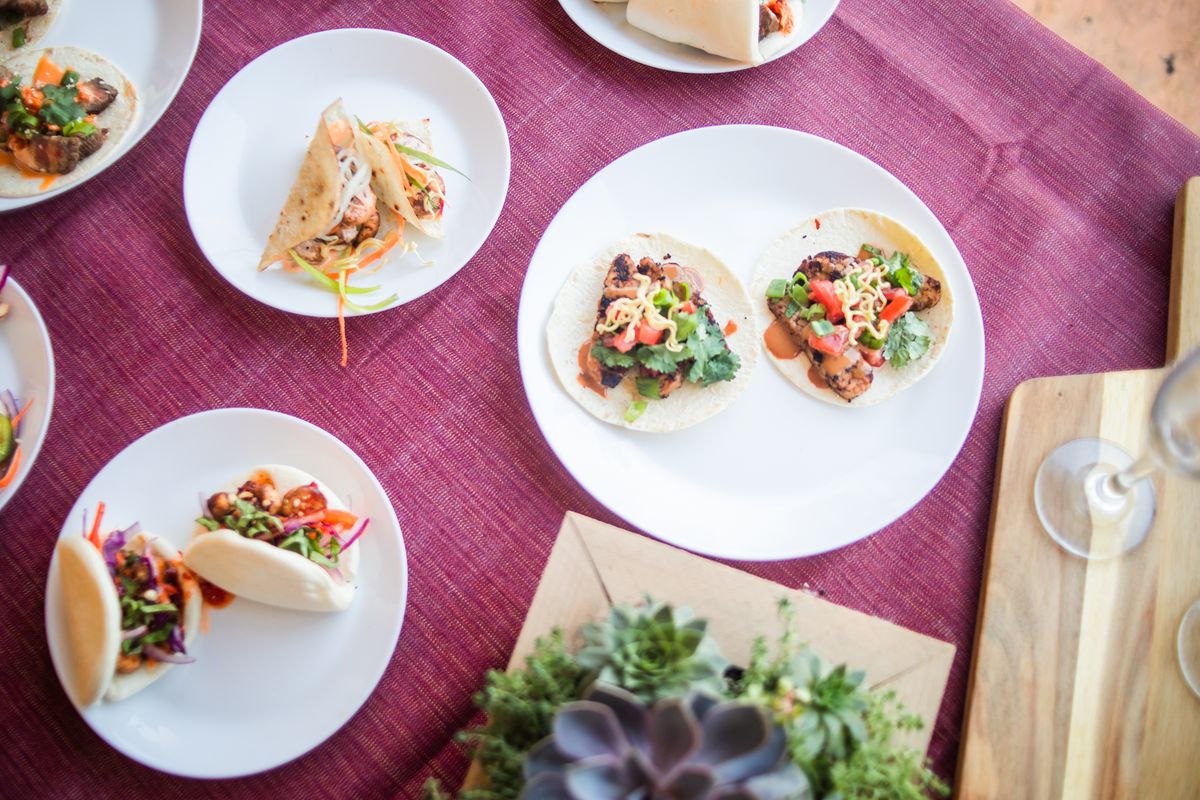 The East Eats menu has Asian influences with options like wraps and bao filled with kimchi or toasted ramen. Most dishes are vegan and can be modified to include protein. East Eats [Courtesy photo]

At this moment, many restaurants have been trying to focus on outdoor seating for better air circulation – an important factor in reducing the risk of COVID-19 infection. However, when the weather changes, dining on the patio has its limits. As a result, some restaurants have started installing geodesic dome tents for sheltered seating. But these structures also have their challenges as they limit the critical airflow that makes outdoor dining less risky. Chicago has even begun requiring restaurants to put warning signs on these domes to highlight the risks of eating indoors.

The owners of East Eats are aware of the barriers to geodesic domes, but believe they are offering one of the least risky versions of this option in their restaurant. The domes are covered with coated canvas material and are currently only half closed. This allows for some coverage by the elements as well as air circulation inside the tents. They are also built on platforms that allow fresh air to flow through the bottom of the dome. In the winter, East Eats will likely close the domes to make sure customers are warm enough but have the option to open windows onto fabric and keep air circulating from outside the tent. 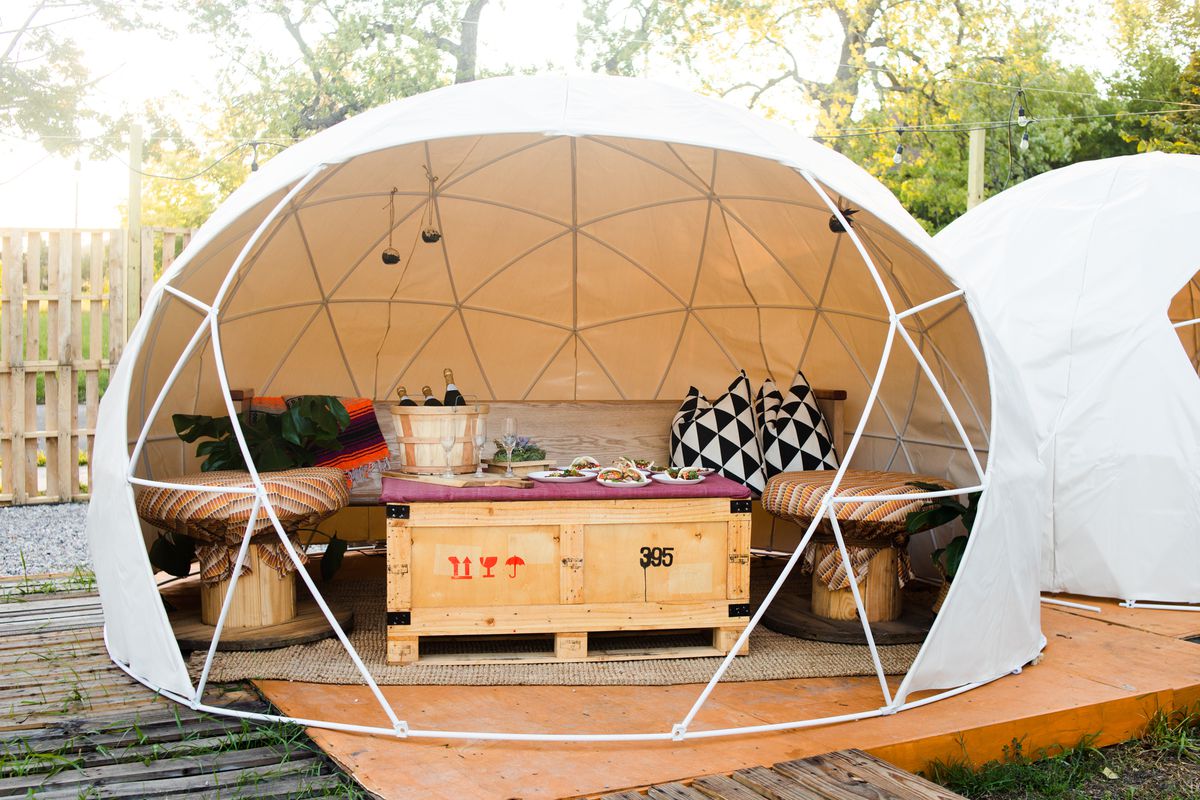 East Eats also takes other precautions, including controlling the number of guests visiting the secondary property at any given time. All customers must reserve their table online through Tock to receive a pre-fixe menu of five items. Reservations are $ 45 per person plus add-ons. As soon as they have been set by the host, customers receive a link that leads them to a digital menu that they can use to order either individually or as a contactless party. “Once [the order is] Our food runner or server will send it to you in the kitchen and ask if you would like to order anything else, ”explains Talley. “That is really the level of contact that goes beyond our service to make sure you are okay and whether you need more water.”

As an additional precautionary measure for COVID-19, customers have the option to leave a tip when making their reservation to avoid their employees having to come into contact with cash. Patrons can also leave cash for their servers at the end of the meal if they prefer.

Ultimately, the East Eats partners see their project not just as a restaurant, but as an experiment in making placemaking. “We see ourselves as a culinary experience as well as an alternative land use experiment,” says Talley. In the future, the group plans to host voter registration drives on the website, outdoor film screenings, and community meetings. “We’re always looking for new partners and new ways to use the space,” he says.

East Eats is located at 1018 Navahoe St. in Detroit. Open Monday, Wednesday and Thursday from 5pm to midnight; Friday and Saturday from 11 a.m. to 2 a.m. (last seating at midnight); and on Sunday from 10 a.m. to 10 p.m. (last seating at 8 p.m.); Advance reservations are required; BYOB; Website.