Stomach discomfort from a man spitting on pizza dough was viewed thousands of times on multiple Facebook and Twitter posts in February 2021, along with allegations that the incident took place in London and the man was a Muslim refugee from Algeria. The claims are false: the video actually shows a grocer spitting on pizza dough at a food stall in the US city of Detroit in September 2018.

The four-second clip was shared here on Facebook on February 24, 2021.

The Hindi headline of the post translates into English as follows: “The tradition of spitting is not only limited here, but also takes place in places like London. This poor man is a peaceful refugee from Algeria. This is a clear fact that either you eat with your spit or you refuse it altogether. It’s your decision.”

Using “peaceful” in such a context is a common way that pro-Hindu right-wing figures rigidly address Muslims on social media, as mentioned in his report in Indian newspaper The Free Press Journal.

However, the claims are false. The video shows a former American grocer spitting on pizza in the US city of Detroit.

A keyword search on Google revealed that the incident was reported here on September 23, 2018 by US television WXYZ Detroit. The video report is titled “Comerica Park Food Service Employee Spitting Pizza While In Police Custody”. 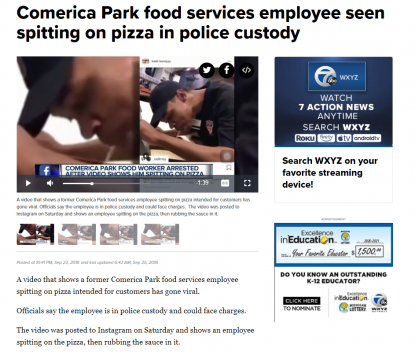 The video is titled, “A video showing a former Comerica Park Food Services employee spitting on pizza intended for customers has gone viral. Officials say the clerk is in police custody and may bring charges. The video was posted on Instagram on Saturday and shows an employee spitting on the pizza and then grating the sauce in it. ”

Below is a screenshot comparison between the video from the misleading Facebook post (L) and the 2018 video broadcast on WXYZ Detroit (R): 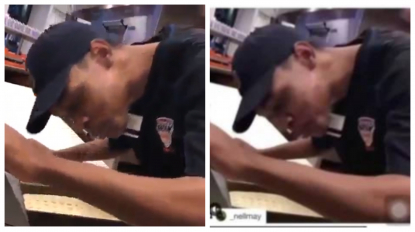 The incident was widely covered by other US media. For example here in the Detroit News and here in ABC 13.

According to a follow-up report by The Detroit News dated Nov. 15, 2018, the man featured in the video is a 21-year-old named Jaylon Kerley. He was released after the video surfaced and given 18 months probation.