Where to find Filipino food in Metro Detroit

When I moved from Chicago to Metro Detroit for the first time a few years ago, I lacked a sense of home. So I started a Filipino Food Popup to share a piece of my culture and love for Filipino food.

As I was setting out to fill in what I thought was a void, I finally found that there was already an active and vibrant Filipino community with several restaurants already serving traditional Filipino restaurants – you just need to know where to go have to look. For starters, that means wherever there is food, there is community. I was fortunate enough to connect with an informal group called the Detroit Filipino Supper Club, through whom I met metro Detroiters and transplants, all linked by our love of food (and karaoke).

The pop-up is on hiatus right now, but I’m happy to report that there are still the long-standing businesses that are still holding it down, as well as newer restaurants serving Filipino food like JP Garcia and his wife, Jacqueline Joy Dino get their money’s worth, the couple behind Isla

With more than 7,000 islands, the diversity of the Philippines is reflected in their diet. Lechon is popular pretty much all over the Philippines, but Cebu in the Central Visayan region is known for it

With Isla, Garcia says: “Filipino cuisine is so diverse. It is a great melting pot of different cultures. “With his formal culinary training and Dinos pastry skills, they want to introduce the masses to Filipino food and give it“ some light and representation in our region ”.

“We try to introduce ourselves [Filipino cuisine] and not only make it more accessible to the Filipinos in the area, but also introduce it to the different cultures and nationalities. That is our goal and we hope that we can be successful. We’re on our way to moving our kitchen forward and making sure it is the next big thing for sure. “

For restaurateurs like Eddie Bautista, the chef and co-owner of Edo Ramen House in Royal Oak, trying to represent Filipino food has been a longstanding endeavor, in his case since 1995 when he opened Little Tree Sushi in Royal Oak (sold since then) the business).

“There wasn’t a Filipino restaurant in the area, so I wanted to try to represent and showcase Filipino culture [metro Detroiters] … Filipino food, ”he says.

He says unlike areas like the west and east coasts, which have significant Filipino populations and chefs who add a modern twist to Filipino food, the Midwest and Metro Detroit cuisine is not as well represented. But with more Filipinos working in health care here, the population is growing.

And maybe with it the appetite for Filipino food?

Here is a selection of where to get Filipino food on Metro Detroit. What did we miss Let us know in the comments.

While this Madison Heights restaurant specializes in sushi, the extensive menu has plenty of Filipino dishes. They serve two different types of pancit (bihon and canton with egg noodles), mommy (noodle soup with chicken or pork of your choice with the option to add a steamed pork bun) and crispy pata, deep fried pork leg. For a traditional Filipino festival, get the Kamayan (eat with your hands) option. Choose up to three dishes like Adobo, Lechon Kawali, Longanisa, and more for $ 35.
31632 John R Rd., Madison Heights, MI 48071
Open Monday to Saturday from 11 a.m. to 9 p.m., Sunday from 11 a.m. to 8 p.m.

Ramen may be in the name of this Royal Oak restaurant, but chef and co-owner Eddie Bautista represents his Filipino culture here in a traditional and less traditional way. Next to the Japanese noodle soup is “Mami Pinoy”, the Filipino counterpart to ramen.

Other Filipino options range from traditional noodle dishes such as Pancit Bihon or Canton to fusion dishes such as Edo House Fried Rice (with the Filipino sausage longanisa) and steak fries with chicken or pork adobo. The Adobo rice bowls are just as popular as the sisig (spicy pork belly). They also have a kamayan festival (a type of service where food is placed on banana leaves and people eat with their hands) for $ 35, with three dishes served with white rice and eggs.
4313 W. 13 Mile Rd., Royal Oak MI 48073
Open Monday to Saturday from 4 p.m. to 9 p.m., Sunday from 3 p.m. to 7 p.m.

Balikbayan boxes (care packages to be sent home to relatives), grocery shopping, and takeaway groceries are all available at this Warren store, making it a one-stop shop. This is a classic turo-turo (translation is literally full stop) where you choose your dishes from what is available that day, cafeteria style. A current menu consisted of pancit, paksiw bangus (milk fish cooked in vinegar), kare kare (oxtail braised in a peanut butter sauce), pinakbet (a sautéed vegetable dish from the Ilocano region) and chicken tinola (a ginger chicken soup). to name a few. They regularly publish their menus on Facebook. So call ahead to find out what they are cooking (and may even set some aside for you). Or arrive early (before 11:30 am if you can) to make sure you get what you want before they sell out.
3866 E. 13 Mile Rd., Warren, MI 48092
Open (winter time) 9 a.m. – 3 p.m. Tuesday – Saturday; Sunday from 9 a.m. to 2.30 p.m.
(Summer time) 9 a.m. – 3 p.m. Tuesday – Saturday; Sunday from 9 a.m. to 2.30 p.m.

JP Garcia and Jacqueline Joy Diño were working in IT when they decided to move into culinary arts. Garcia attended the Art Institute of Michigan while Dino attended the French Pastry School in Chicago. The two worked for some pretty big names in the business, such as Chef Takahashi Yagihashi from Slurping Turtle. Garcia also opened Maru and Urban Ramen. But then they started thinking about Filipino food, starting with a pop-up in the menagerie in Pontiac. It was sold out and that gave them the confidence to keep going. They applied for one of the restaurants on the Fort Street Galley, which happened to be next to Maru and concluded Garcia’s culinary journey. When they got the call to open their Filipino restaurant, they thought “this could be special”.

Though the dining room didn’t last, it helped Garcia and Diño build their clientele. They found a turnkey room (which used to be a bakery) in Sterling Heights where they reopened Isla earlier this year. Many of the dishes from the galley are represented, such as the best-selling Adobo and the Lechon Kawali with Dinuguan sauce. Dinuguan is a traditional beef blood soup, and Garcia says it was a pleasant surprise to see many non-Filipino customers ordering the dish. “It’s pretty good to know we’re introducing [the traditional Filipino soup to non Filipinos]. Another local dish that isn’t that common here is Chicken Inasal. There are also dinosaur’s unique desserts like the tropical eube cake, the chocolate yema cake, and the rivalless cashew (a meringue cake made with cashew and buttercream).
2496 Metropolitan Parkway, Sterling Heights, MI 48310
Open Tuesday to Saturday from 11 a.m. to 8 p.m., Sunday from 11 a.m. to 3 p.m. 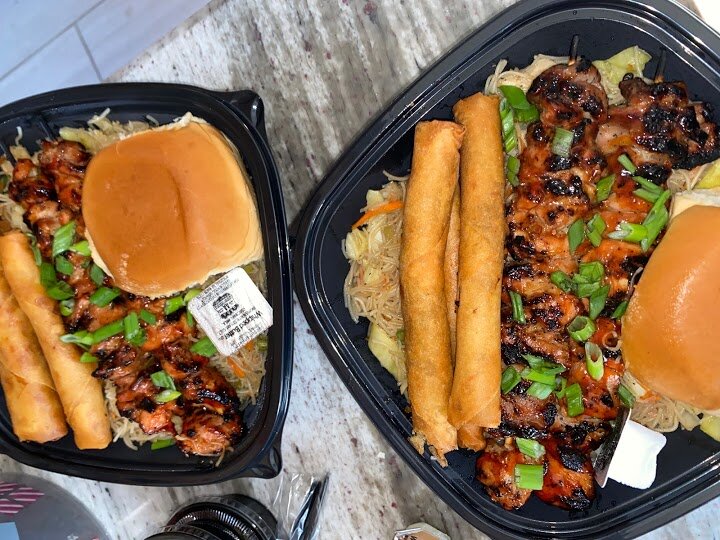 While this casual eatery serves more than just Filipino food, with an eclectic menu that includes everything from burgers to orange chicken, the Filipino influence is evident in classic dishes like lumpia (spring rolls made with shrimp and pork or beef), pancit (rice noodles) Chicken, carrots, celery and cabbage) and skewers (chicken marinated in banana ketchup). Can’t choose between the three? They offer the Filipino combo where you can get all three of them.

Gene Krowl, owner of the restaurant, has been in the restaurant industry for 30 years. He worked in the Washington area, where he met his wife, Tessie, whose family is from Cebu, Philippines. She cooked a lot for family and friends and eventually started cooking lumpia, pancit, and other dishes for other Filipinos who found out about their food through word of mouth.

The couple, who have a 12-year-old daughter, moved to Michigan (where Gene is from) about six years ago and Tessie kept cooking. In 2019, Gene was fired from his restaurant job. The two had long talked about owning their own restaurant, and firing seemed like an opportunity to branch out and do their own thing.

Right now they only have the few Filipino dishes.

“I want to do more, but we’re a really tiny place,” says Gene. Still, the two of them have big plans. They started running a special on chicken adobo that got “rave reviews,” says Gene. And if he can make it, he hopes to serve Halo Halo once the temperatures rise.
33140 Groesbeck Hwy, Fraser, MI
Open Monday to Friday from 11 a.m. to 7.15 p.m.

In addition to the usual favorites like Lumpia Shanghai, pancit and pork or chicken grill, discover some of the other specialties like the all-day breakfast, i.e. silogs (the Filipino version where an egg is laid on top) with meat of your choice, tapa (beef), tocino (Pork) or longanisa (sausage). Other typical dishes include chicken afritada (a hearty tomato-based stew with carrots and potatoes) and dinuguan. They also have a wide variety of desserts, including turon (a fried banana spring roll) and sapin sapin (sticky rice cake with toasted coconut). When summer is over, the halo halo (shaved ice-cream dessert) is a must. They are currently only open to take away. Call them at 586-217-5947 to place your order.
27751 Harper Ave., St. Clair Shores MI 48081
Open Tuesday to Saturday from 10:30 a.m. to 7:00 p.m.

Another Turo-Turo eatery, this restaurant is located in a shopping mall in Troy and serves up classics as well as some unique items that you may not see elsewhere. A recent menu featured pork binagoongan (pork belly steamed in shrimp paste) and the best-selling boneless smoked bangus was on offer during Lent. The desserts such as leche flan and cassava cake are also not to be missed. They also have a small selection of Filipino foods and staples.
42915 Dequindre Rd., Troy, MI 48085
Open Tuesday to Sunday from 10 a.m. to 7 p.m.